skip to main | skip to sidebar

I was recently asked to present a vocal workshop for the New York Singing Teacher's Association at Teachers College, Columbia University. I am a graduate of Columbia and it was interesting to come back to teach on the campus where I spent several very happy years.
After graduating from the College, I stayed on to get my Master of Sacred Music Degree at the School of Sacred Music of Union Theological Seminary right across the street from Teachers College. At the same time, I became the Assistant University Organist and Choirmaster at St. Paul's Chapel, Columbia, under Searle Wright.
So this was a sort of very belated home-coming for me.
After having invited one of my students from Smith College to participate (The Association asked me to work with one of my current students), I found that they wanted me to speak on 'Teaching the Male Voice'. Well, I've taught plenty of men in my day, but we decided that since my current male students are in professional careers and are living in London, Montréal, and various other ports of call, I would have my Smith student sing, followed by two baritones chosen by the Association.
I had been given a list of questions they wanted me to discuss before working with the singers. Some of the questions I could answer in a few sentences, but for the ones concerning vocalization and breathing, I used my student to demonstrate my theory on these principles. We did several vocalises taken from my book, Vocalizing from the Ground Up!
I then had the class stand and join us in some breathing and relaxation exercises, and then my Smith student -- a very fine soprano -- sang 'Als Luisa die Briefe' of Mozart and 'Io son l'umile ancella' from Adriana Lecouvreur of Cilea. 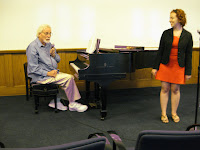 She sang beautifully, making me very proud of her and the work we have done together for the past two years at Smith.
Then came the men. 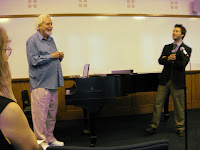 The first baritone sang 'Bob's Aria' from The Old Maid and the Thief of Menotti for me. He had a fine natural voice and sang with a certain amount of ease. We worked together to encourage him to see where his sound was going. In other words, I was trying to get him to move the vocal line easily to a distant point, in this case, through the windows at the back of the room to the back windows of the apartments on the next block. He was fairly successful in getting this idea. We also worked on having a more natural use of the text; emphasis on the correct syllable and clarity in diction. All in all, this is a fine young voice that, with work, can become excellent.
The second young man then stood up to sing for me. He is also a baritone or bass-baritone. I had met when him I arrived early at the hall. We spoke for a few minutes and I was very impressed with his rich speaking voice. Interestingly, when he sang, none of that richness was in the sound. I told him that I felt his voice was stuck, and he agreed with me. 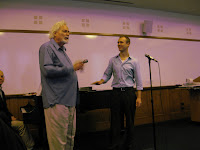 Now, how does one 'unstick' a voice in twenty-five minutes?
In a previous post I have spoken about the difficulty of teaching these 'Hit and Run' Master Classes, where one works with a singer for a brief time, giving information that may help them, after which they depart and you may never see or hear them again. One hopes, as I do, that our brief work together will help the singer release what is obviously a very good natural instrument.
The second baritone and I worked on focusing the instrument, which sounded held back in the throat. I used what I call the 'Duck Call' exercise which gives the singer a great sensation of the overtones apparent in the voice. He was able to do a fine Duck Call and I tried to have him incorporate these overtones into various vowels and into the text of the aria. We had only moderate success.
He also has a habit of biting off the end of phrases, pulling the sound back into his body rather than releasing it. He needs to feel the extension of the vowel before adding the final consonant.
All in all, this could become a fine voice but he has a lot of work to do.
Perhaps some day a wealthy University or group will invite me to do the kind of workshop I feel would be far more beneficial to the singer: several days of classes hearing the same singers and giving them time to absorb and practice the ideas I am giving to them. Some may describe me as a maverick voice teacher. And it's true: I do not always teach  the party line. Yet six of my students have sung at the Met, which just may suggest that being a bit of a maverick is a good thing. My dear, belated Lorraine Hunt Lieberson was a maverick, as well. She was called the anti-Prima Donna and 'Maria Callas with a vocal technique.'  I guess that I am the anti-anything that does not encourage the voice to sing clearly, easily, and beautifully. That is my aim!
Multi-day workshops would be far more beneficial for the student than these hit and run workshops. Any takers?
Posted by Herbert Burtis at 3:27 PM

Herbert Burtis
Sandisfield, MA, United States
I have given my blog the name of my first ancestor, Pietro Cesare Alberti, who came to these shores in 1635. He was the first Italian-American. I have had an international career as a pianist, organist, and harpsichordist. As a vocal teacher I have taught at Harvard University and Smith College as well as having a studio in New York City. I now have a vocal studio in Chicago.I have performed throughout the United States and in Denmark, Germany, Austria, France. Barbados, St. Vincent, Trinidad,Tobago, and Bermuda. I made my Carnegie Hall debut in 1967 and have appeared numerous times in Carnegie Recital Hall, Weill Hall, and Steinway Hall. As Director of the Ferris Burtis Music Foundation, my mission is to help young classical musicians in their education and careers. For twenty years I was the voice teacher for Lorraine Hunt Lieberson. Seven of my students have sung at the Met, I may be reached at roodhill@verizon.net. www.hburtis.com http://ferrisburtisfoundation.blogspot.com http://albertitalks.blogspot.com